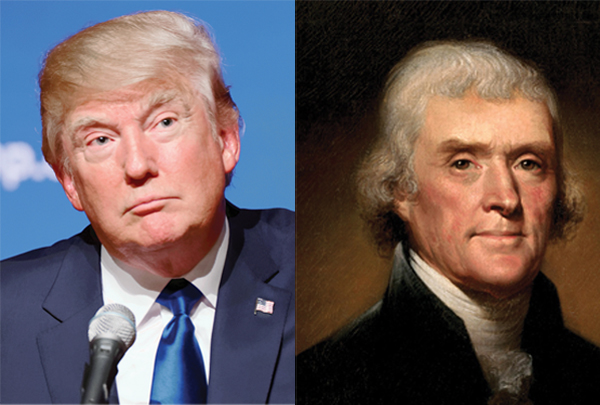 Jefferson is quoted as saying “Do you want to know who you are? Don’t ask. Act! Action will delineate and define you.”

One thing that cannot be argued about Mr. Trump’s over the rampart lifestyle is his willingness to act.  Statistically speaking, he is arguably the single most productive individual – business wise – we have seen for numerous decades to be running for the Oval Office.

The past few months have not just been entertaining, they have also been full of fast paced action.  Now that the presidential race is down to a few stout horses, the heat gets hotter and the strongest will eventually survive.  It is easy to find good qualities in most every candidate, and of course bad ones too.  Trump gets hammered from all sides for speaking plainly about his disregard for Rosie O’donnell (whom I think is also funny) and others when she as a comedian has made quite a nice bit of loot by doing the exact same thing with others.  Oh the irony of it all.

Observing the never ending facebook posts from friends and acquaintances weighing in this political season has me quite spinny.  It’s an avalanche of mixed marketing, ideology and falsified information.  For me, it’s also just politics as usual upon the grandest stage in the game.  What I liked about Ron Reagan I also like about Mr Trump.  An overall consistent message is being drummed in that has been obviously well honed over decades of effort.  Reagan was giving similar presidential speeches as head of an actors union and prior to his being governor of California.  If I close my eyes and listen to footage of Trump testifying to congressional subcommittees on economics twenty five years ago – it’s the same message he’s putting forth now.

And for me, it stems around his willingness to act.  Yes he speaks impromptu and seems to be a honey badger when it comes to “political correctness” – well, I for one can certainly forgive those transgressions if he has the potential to help right the ship.  Business statistic wise, he’s in a league of his own.   And he does something else I’ve noticed of late – he builds confidence wherever he goes.

The world I work in has a lot to do with confidence. Without confidence, people don’t make purchases, travel, open businesses, invest, get educated and more.  Confidence is something he has volumes of and I believe it is sorely needed to emanate forward to those individuals that are the backbone of civilization.  The business builders, artists and dreamers.  They are the ones that lift the rest to new heights and its one thing to dream of prosperity without effort but I believe natural laws are in play and most all people I’m familiar with most certainly know that valuable goals and purposes can be achieved when accompanied with tremendous effort, smart planning and the correct environment to produce.

It would be pretty easy to dig into anyone’s closet and find more than a few skeletons, nobody of late has solid gold halo’s floating over the skulls.  So yes, he has numerous picadillos quite easy to attack.  But yes, he has solid production stats based upon his overwhelming willingness to act that I’d guess our beloved founding fathers would admire as well.

Looking forward to the next few months as the potential for a new era begins.  Selling America to America was a concept I first listened to back in the 60’s.  Rich Devos, the gregarious co-founder of Amway has a famous speech entitled “Selling America” you can still listen to at:

Since that time, I have only witnessed Ronald Reagan sell that concept better.  Until now that is – with the movement that can be called Donald Trump.  Trump has mastered the art of selling to the hard working people of America the ideals it was founded upon.  He does it with simplicity, repetition and confidence and a ocean load full of enthusiasm.  For me, it’s just what the doctor ordered.  For my Bernie loving friends, well I understand why they might not revel in his viewpoints but it does not mean I have to agree.