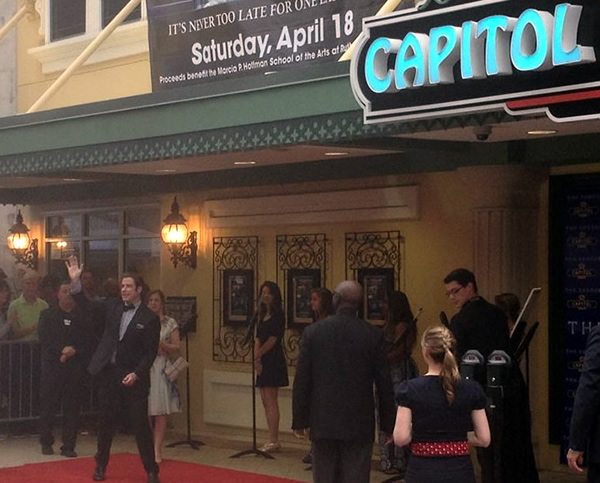 This past Saturday evening, those of us lucky enough to call Clearwater Florida our home were treated to some special Hollywood magic.  Mr. John Travolta was in town on the red carpet hosting a one night only event – at the historic Capitol Theater – launching his new motion picture “The Forger”.  As a Florida resident, John supports the movie industry within our state in big ways.  He is consistently helping to bring more awareness, funding and jobs to the area. It’s big business and he is one of its leading stars.

It was a magnetic evening downtown with a vibrant atmosphere full of enthusiastic arts supporters.  It was reported that including John and the other local contributors generous support, over fifty thousand dollars was raised to help expand the Martha P. Hoffman School Of The Arts.

You can find out more about their great program at www.rutheckerdhall.com/education.

Over the past few years, the downtown Cleveland Street District has been transitioning from a sleepy simple “Beach Byway” into something quite unique.  It overlooks the gorgeous Gulf Intracoastal and is within walking distance to one of the world’s most famous beaches.  Winter the dolphin lives here too!  Nestled near the Town Hall Bluff you would be hard pressed to find a better sunset view than strolling westward on Cleveland street between the diverse selection of shops and restaurants towards the park, yacht harbor and beautiful Clearwater Beach bridge.  The atmosphere is starting to remind me of a scaled down version of my birthplace, San Diego California.

Although Saturday evening, it was all Hollywood.  Limousines, red carpets, movie stars, bright lights, large crowds, beautiful weather, exuberant fans…who could ask for more.  I’ve not had the pleasure of attending the Oscars, but this to me was like a short glimpse into that world.  Watching John mingle effortlessly with his adoring fans, endlessly posing for photos, signing autographs, giving hugs and genuinely happily being there was extremely refreshing to see.  What I was able to observe was someone passionately giving back to the art community from which he had come.  Clearwaters own Mayor Mr. George Cretekos was overheard to say “its another gem in the city’s crown.”

When a person’s passions and moral compass are lined up to “True North” like John’s seem to be, great things normally happen.  Most of us in business would pay handsomely for the kind of word of mouth marketing and PR this type of event creates. A positive buzz like this in our local media had normally been reserved for our water mammal friend down the street.  Paying for it directly somehow never works, what does seem to work is having a great service or product that is backed by passion with integrity.  With that combination in hand, the process of making something well known would seem to become a very simple endeavor.  If asked to speak for the community, I would say this event was a wonderful marketing coupe for us all.

Travolta told reporters “A lot of my friends have played the Cap,” “It sounds like a theater that’s inviting a lot of, in my opinion, very important artists who are doing quite well by it.” The Forger is available on DirecTV, with a limited theatrical and wide VOD release April 24. “It’s a wonderful film that also admires the arts within the subject and story line. I thought, wouldn’t it be wonderful to use this film to raise money for the arts in Clearwater?” Zev Buffman, president and CEO of Ruth Eckerd Hall that owns the Capitol, said Travolta’s event comes at a crucial time in the Hoffman school’s expansion. John told the audience “Thank you for being here, for supporting the arts. I had the privilege of growing up in a family that supported the arts … but not every family has that advantage. Tonight, you are helping … other young people to become artists of their dreams, who didn’t have the advantage I had as a child.”

It’s fairly undeniable that living legend Mr. John Travolta has forged one of the most successful Hollywood careers of all time.  Like many, my earliest recollections of his prowess started with his iconic “sweathog” character Vinnie Barbarino from ABC’s  hit show Welcome Back Kotter. My older sister had gigantic posters of 70’s stars David Cassidy, Bobby Sherman, Donny Osmond and of course Mr. John Travolta. Back then, there was three main networks along with a couple minor local stations to choose from and Welcome Back Kotter was most definitely one of the 70’s highest ranking TV shows that everyone watched every single week.  Of course, John’s movie career took off from there to a point only Boeing 707 aircraft only fly.  It even reached the zenith where the worlds most beloved Princess was requesting a dance. Thank you Mr. Travolta for all you have done to make downtown Clearwater, the Cleveland Street Business District and the world itself a more enjoyable place to live.