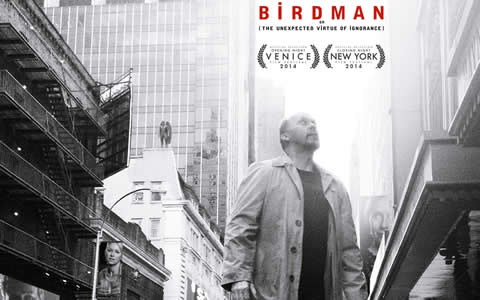 This year’s top award goes to a brilliantly written, produced and directed movie that at its core is still based upon the type of fantasy we all grew up with loving – super heroes…

Growing up, I was into swimming, hence Aquaman was my guy.  Something about being able to transition and dominate water to land that was fantastically euphoric.  Most of my young comrades invested numerous hours watching and emulating a vast panorama of super heroes.  I suppose my theory is that creative imagination can take us anywhere in the universe, and sometimes that can be a better place than where we might live.  Over the years, the digital age has improved in such dramatic fashion that the limitations of creative imaginings have been completely removed.  Movies just keep getting better and better at replicating our own creativeness.  So with superhero themed Birdman winning this year’s top industry award, we find the two universes of “human reality” and “human imagination” combining into a winning combination.

With over millions within 100 countries around the world tuned in to see the pageantry of Hollywood’s finest stars, it certainly creates advertising opportunities to drool over.  With the majority of speeches dripping with the same as the year before thank you to everyone flows, I would like to coin a new phrase for marketing around these types of speeches as “admiration marketing”.  I’m always moved watching wide open loving thank you speeches from person to person that of course represents the culmination of years of work into top level achievement.  It’s like Valentines day on steroids and what’s so wrong with that as it surely beats the hell out of our normal stream of chaotic news.

All the ad dollars being spent in and around the Oscar’s, movies, awards, speeches, dress designers, etc. to reward the admiration we have for the people creating fantastic movie products for us to enjoy, to me seems like money well spent.  More often than not, the artists of the world make it a better and more human place.

Admiring Michael Jordan’s brilliance on a basketball court is not much different than admiring the genius required to create Birdman and other stellar movies.  We all admire creative brilliance and of course that ends up being rewarded in many ways, one of which we can now officially call “Admiration Marketing Dollars”…

Former cinema superhero Riggan Thomson (Michael Keaton) is mounting an ambitious Broadway production that he hopes will breathe new life into his stagnant career. It’s risky, but he hopes that his creative gamble will prove that he’s a real artist and not just a washed-up movie star. As opening night approaches, a castmate is injured, forcing Riggan to hire an actor (Edward Norton) who is guaranteed to shake things up. Meanwhile, Riggan must deal with his girlfriend, daughter and ex-wife.