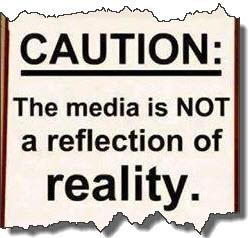 It is interesting to me that media bias is suddenly popping up on some people’s radars due to, of all things, a perceived tendency to ignore Hillary Clinton’s faults, and to throw a spotlight on those of her competitor Donald Trump. When these same channels lambasted and continually showed disrespect to both the person and the office of President Obama, these same people were in agreement with the news coverage. Bias confirmation seems to be the primary measurement of how good a news service is these days.

Bias confirmation rules the roost now – as people blow up in comment threads about something that doesn’t agree with their view of the world appears. It is the same thing that drives fans to issue death threats to comic book writers that don’t give them the story they want.

Media bias is the mirror image of this – and it is driven by consumer demand. With so much news you need to be salacious and you need to keep people’s interest – facts are a little bit of a problem when you are trying to achieve this – opinions are much easier to wield.

The Media Is About Viewing Figures, Not Truth

Personally, I have found an equal balance of reporting on both of the candidates, and none of it has been particularly pleasant to watch. “When they go low, you go high,” is apparently something that Michelle Obama said, but it really doesn’t feel like either candidate has been in some elevated moral position during this campaign season. If the candidates slung less mud at each other, the “news” reporters who are basically a thinly veiled entertainment network product, wouldn’t have so much to seize upon.

In the same way that broadsheets and serious reporting went the way of tabloids and opinion columns, so to has television journalism degraded. If only we lived in an Aaron Sorkin Wonderland, like The Newsroom, where journalistic integrity, standards, and just plain good reporting existed, we might actually have a Fifth Estate we could rely on. We don’t have that.

When you watch the format of something like Fox News, which is populated by talking heads who generally do nothing but offer unsubstantiated opinions on all manner of subjects, and then at the end of a barrage of bad “news” give us the proverbial spoonful of sugar in a human interest story, to ease the poison down, and don’t see that the news hasn’t just suddenly become biased, you haven’t really been watching.
When Bush Junior was elected it was Fox Network that pre-empted that actual win, due to a familial connection with Bush, reportedly a cousin. No uproar was heard then amongst the non-liberal voting populace.

Good Stories, Not Journalistic Investigation, Are The Thing

It took until this week for a major news outlet to report on the terrible situation in North Dakota at Standing Rock, where Native American protestors have been tear-gassed for trying to protect their sacred grounds from a pipeline. Bias is built in; agendas aren’t hard to see – dig around a little and look at the guys who own these mass media companies. If you start at Rupert Murdoch, look at his son who is slowly working to erode the integrity of National Geographic, and keep on rolling, you will not be faced with any shortage of conflicting interests when it comes to news providers and their private interests.

In advertising truth is important – if you offer to sell someone something and it isn’t what you said it was you are rightly accused of false advertising. As the veracity of the news media comes more and more under scrutiny, and is trusted less and less, the purpose and the usefulness of the Fifth Estate diminishes further.

Whoever gets elected, you can rely on one thing from the media – that they will be biased in their reporting, one way or the other. They are pretty much a Lobby Group, but as they target Trump, and are accused of being Liberal, people forget the treatment that the sitting President has had at their hands. The Press are much more fickle – and they really care more about viewing figures than the truth. If focusing on the mistakes of Trump gets more people tuning in than Clinton’s emails, then they are going to run with that. Sex sells, and emails aren’t as sexy. The debates weren’t informative, and weren’t designed to be – if you want to work out who to vote for you might be better researching their policies elsewhere, and turning off the TV. TV markets a particular world view, and it doesn’t necessarily have anything to do with what is going out there in the world.