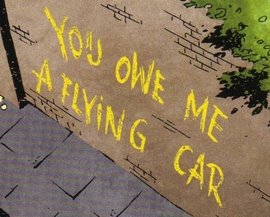 Waiting On The Unarrived Future

It’s kind of a broken promise: vaporware – tech that has been described and marketed as if it existed, but which doesn’t actually exist in the real world. But maybe there is a hope buried in some of this imaginative salesmanship that will reinvigorate my interest in some of the hardware out there.

Maybe some technically gifted inventor scours the internet digging around for tech that is talked about, but which doesn’t exist, and then they pick up the idea and run with it, like some tech fairy godmother. Or maybe not.

The Microsoft Surface bores me. Apple bores me. We have plateaued, and I have come to expect more than a low level drone where updates about new technology are basically just tweaks to what is already out there. Ever wanted tits on a bull? We have an app for that! Want to travel through a virtual reality version of the Dire Straits video for Money For Nothing? We’ve got your back.

Perhaps I need to dig around in Kickstarter for a day or so, and see if I can find something outside the mainstream. I write science fiction and dream up products I’d love to own. Maybe I’d just settle for a more intuitive way to access the music I have in the Amazon Cloud, because Alexa doesn’t have a throat I can punch.

Elon Musk provides some interest but not is focused primarily on Mars, batteries, and killer robots – rinse and repeat. I am not sure that it always used to be like this. When things arrived they arrived as a genuine surprise, and they felt like they had a huge impact when they did arrive. Getting my first mini-arcade game was fantastic. The Millennium Falcon arriving alongside the AT-AT blew my mind. When the first home computer landed it was a surprise – I’m talking the ZX81 in England. I remember a similar sense of the alien when we first saw an electronic calculator from Texas Instruments in 1981. Then I remember getting buzzed about electric typewriters which had a small LCD screen, to step up from the Olivetti typewriter I’d been using. My first PC opened up limitless possibilities for the projects I could work on. My first Apple computer was something I fell in love with. My MP3 player called to mind the clunky old Walkman, but delivered a huge amount of my music collection into my pocket. And, though I was late to the game, my iPad felt like something touched by the future.

Perhaps I am just nostalgic for the delay – for the difficulty in being able to get things. Apple seems slightly more attractive because it is more expensive than a PC. Maybe having it more difficult to get stuff makes it more desirable to have said stuff. That would put vaporware on the right kind of wavelength – it’s impossible to get hold of, and that might never change about it – I started out by saying vaporware is kind of a broken promise, but perhaps it’s not. It might be more that actual existing tech is the broken promise … it doesn’t deliver me into the world of Star Trek, doesn’t get me close to competing with The Jetsons, at least in some ways it doesn’t. But then you pause and think of the inter-connectivity available to you, all the data at your fingertips, and what you can do with that data, and you realize you may have arrived somewhere just as interesting. Is it true that innovation and forward movement are just hidden behind the black mirror?

There may be an entire other class of vaporware – not that put together and promoted by companies and marketers, but all that ghost tech that we desired from fictions. Flash Gordon and Buck Rogers sold us on a certain kind of future. Picard on the holodeck or at the food replicator. Hell, even the Replicants from Blade Runner are, on some level, objects of desire. As Freddie Mercury once sang I want it all, I want it now! I don’t want to live in a graveyard of half arrived ideas; I want something more solid and real – I want the future I was promised.