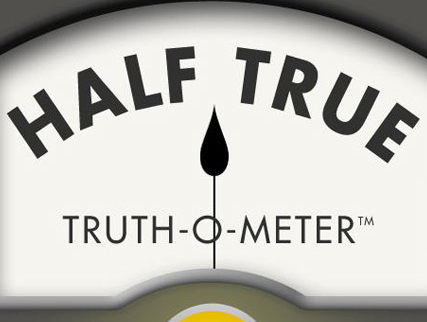 Truth is important – facts are unassailable; and they are either facts or not … it is not dependent on viewpoint. If you market your product as being something and it proves not to be, you will be upbraided for false advertising. Look at how newspapers and politicians generally market themselves though, and you will see that facts aren’t often the solid things they should be.

I hate the term post fact politics, but it definitely seems to hit the nail on the head in terms of the emergent trend in politics currently. It has been seen in both the UK and the US, with Trump and his fudging of employment figures and misrepresenting his own words, with Clinton’s elastic explanation of her email situation and personal issues, and with Theresa May being a little free and easy with the facts when trying to push through her frankly xenophobic policies in regards to foreign workers. The move towards hyperbolic statement and conflation, and use of juxtaposition of dis-related ideas to imply self-evident truths that do not exist is disturbing. But the hot-house in which this particular breed of weed has grown is none other than the prevalent media atmosphere.

Most newspapers are little more than a cobbled together mess of opinion columns; and the television media’s version of this, talking heads, is a comparable disaster. They do similar damage to journalistic integrity by championing a journalist’s personality and viewpoint over what used be the important focus of a news story – the facts. Viewing figures, advertising revenue, and investors are what concerns most newsrooms, their editors, and their anchors … not the news itself and how accurate it is. This advertises something very different to the message about themselves most media outlets would like conveyed.

Move something towards the realm of opinions and it gets tricky to rebut people’s statements – why? Because they are giving out opinions, not facts. Facts, as stated, exist independent of opinion, and it can be harder to slave them to a certain viewpoint if they don’t support your argument. Facts are inconvenient, but as soon as you alter something about them they cease to be facts. If you do away with facts altogether though it is seemingly much easier to advance your agenda, and if you are dealing in viewpoints it can be easy to get agreement if what you are both talking about supports your world view. Who needs facts? Do enough people agree to forward your agenda?

Is it just the media presentation of Trump that makes him seem so problematic? Is it Clinton’s smooth delivery of data that makes it seem like she knows what she is talking about? This is, of course, when either of the candidates ceases mudslinging for long enough to actually address the issues. The recourse to fact-checkers is maybe not such a bad thing, and both candidates have been advocating for it, but in the moment, when faced with each other; when they are whipping up a storm, are facts even in the room? It’s not often much in evidence. People are angry and disgruntled and hyperbole of the kind we have been seeing connects.

It’s been asserted in some places this week that Wikileaks is unpopular because it is doing what journalism used to do, providing facts; the implication being that the Fifth Estate is toothless and therefore not dangerous to the establishment in the way Julian Assange’s website is. Politics and its relation to facts has always been a little sketchy, and the honesty or accuracy of what someone says while on a political platform are often in doubt for most people, especially during the run up to the elections.

These recent debates don’t advance anyone’s understanding of the issues, and now we have to juggle the veracity not only of things asserted about the state of the country, but also the veracity of things said about the candidates, things which seem even more front and center than usual with this election.

Fight the campaign on social media, on the news, at rallies. It is easier to get your opinions out there unchallenged when you have a receptive audience, and when someone disagrees, and facts aren’t ever used to address the issue, you enter this realm of back and forth with little possible chance of resolution. The media are as guilty, if not worse, of doing this – Fox and CNN reports are rife with the reporter’s personal opinion, and anyone trying to get an unbiased report is heading for the quicksand.

That the proof is in the pudding is not a comforting idea when you are going to have to spend a whole presidential term eating that pudding if you are wrong. This is why a lot of people are turning away from mainstream media – why they are digging elsewhere to find facts to validate or dispute the opinions which fly around unchecked.

Maybe the term “post fact politics” says more about our media and the way they report things than any kind of watershed moment in politics. Mainstream media outlets seem to be doing little more than advertising their own agendas and marketing their own choice of candidate now – they are selling a viewpoint more than they are involving themselves in news reporting.

Hillaire Belloc, reporting on the Free Press of his day said: “[It] gives you the truth; but only in disjointed sections, for it is disparate and it is particularist”, saying you have to “add it all up and cancel out one exaggerated statement against another”. So maybe it isn’t a new phenomenon at all; perhaps it is just more blatant, just as the politics seems in some ways more bombastic and blatant. Whatever the case, truth is the loser, and it advertises the worst qualities of all involved.