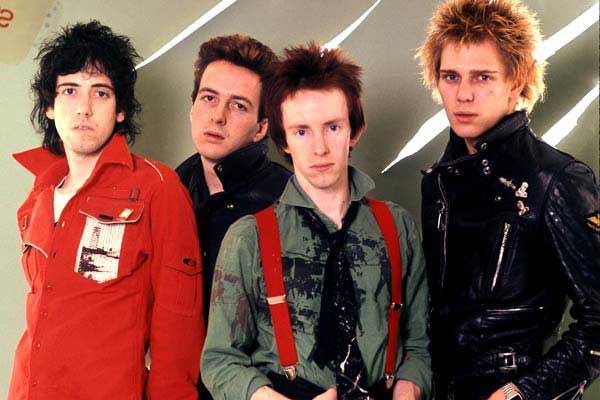 The 3rd album I ever bought was the The Clash: The Singles, and back when I was 18 Combat Rock was one of my favorite albums. I used to sing along to The Sex Pistols regularly. I idolized Siouxsie Sioux. I was super aware of it as a kid, and had a crush on a neighbor who dressed as a punk, but I wasn’t really old enough for punk in its heyday. At 8 in 1983 I was a skinhead with a bomber jacket and DMs, as a teen I was into heavy metal. This Is England by Shane Meadows seemed like familiar territory.

I think it was harder to get nostalgic about stuff because it was harder to get hold of some of the music. I started with radio stations and trying to record the odd song that I could find, as and when it played. Cassettes came next, and I’d play them until they unspooled and stretched and ended up sounding like Alvin and the Chipmunks. CDs were the point where it actually became easiest for me to explore all that punk had to offer, or what had been released at least.

So this year is the 40th Anniversary of Punk – I read around a bit and am not sure what event they are dating this by, but any way, London is kicking off a yearlong celebration of the music and the movement. Something I had strangely remained unaware of until Malcom McLaren and Vivienne Westwood’s son announced he was going to burn £5million worth of punk memorabilia, because he feels that the celebration represents the co-opting of punk by the establishment, and that is just essentially wrong.

Does he have a point? Something anti-establishment being commercialized so much? Well, how long is it since that wasn’t the case? Isn’t it a bit of a dead horse to trot out and flog this late in the game? Think about The Sex Pistols and their Filthy Lucre tour, or even their performance where Johnny Rotten asked the audience “Ever feel like you’ve been cheated?” The Stooges reformed. The Damned have got back together at various points. You can buy “make yourself a punk” kits in Hot Topic; people do it for Halloween. The battle may have been lost a long time ago.

Joe Corre was 9 when the Punk scene erupted in 1976, and has since become a multimillionaire after founding the Agent Provocateur lingerie chain. Old punks that have been interviewed have talked about his protest act as being an empty gesture, and despite often being tagged as nihilistic punk had a social conscience and awareness that was very front and center, so setting light to £5million worth of anything seems more than a little antithetical to the ethos of the movement.

Punk is still alive and well, if a little less center stage, and digital music platforms have given it a new lease of life, much like many other time-locked musical periods. I still have all my punk records and I listen to them regularly, only made possible by the man and his desire to monetize everything.

How do you sell an anti-authority movement through a mainstream thing like a yearlong celebration of it’s 40th year and keep everyone happy? Well, it’s not going to happen, is it? You have to make your peace with the fact that your favorite music is surrounded by rampant commercialism, and with the fact that without greedy capitalists pumping out the different music formats most of it would probably have died away.

If something like this 40th Anniversary celebration makes it easier to get hold of the music then I have no problem with it.