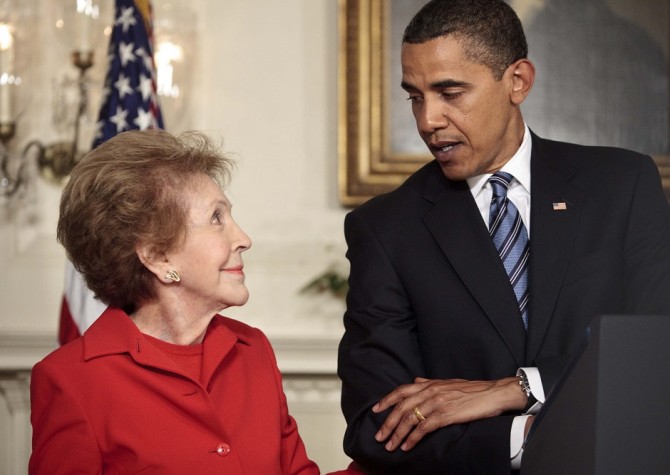 President Obama is making some interesting choices of late in not going to the funerals of some very prominent people, where there is an expectation that he should attend. He chose not to attend Supreme Court Justice Antonin Scalia’s funeral, and people argued that it showed disrespect; even though he did go to pay his respects later. The same is now being said of his choice to attend SXSW instead of going to Nancy Regan’s funeral. There is an expected protocol in situations such as these, and the fact that the President is choosing not to follow it definitely communicates something, and perhaps not the message he intends, nor necessarily the one other commentators wish to push; it is definitely somewhat ambivalent though, and this relinquishes a degree of control over the impression given.

The White House hasn’t really offered any kind of good reasoning behind the choice, behind either choice really, and maybe the fact that he doesn’t need to win any votes means he doesn’t feel the need to court good PR in these areas. Maybe he doesn’t care so much for the court of public opinion regarding these matters – he has, after all, made unpopular choices before, and will probably make more before he leaves office. Going to SXSW instead, to talk about civic engagement, and broader social issues to do with technology might suggest he is now playing a slightly different game – shooting a little further ahead, to the point when he is no longer in the White House, and needs to transition into some other role.

Paying Your Respects Is Good PR And More

A lot of past Presidents in the last year tend to make decisions that are designed to cement some kind of statement about what kind of Presidency they had and what kind of President they have been in people’s minds – it is the business of ensuring some kind of legacy. Despite arguments saying Obama shouldn’t nominate a replacement for Scalia, this is definitely one area through which that legacy can be secured. These choices and every other aspect of President Obama’s term in office is going to add up to form some kind of final assessment of what life under President Obama constituted – sure, that may take some time for the pundits and the historians to unpack all the significance and ramifications, but even as the clock counts down, there is a degree of control that can be exacted, and a certain message that can be sent.

A lot of goodwill could have been generated from doing these simple things that he, as President, is expected by the people and the establishment to do. Why keep making the exit from office bumpier than it need be?