National Geographic In The Foxhole 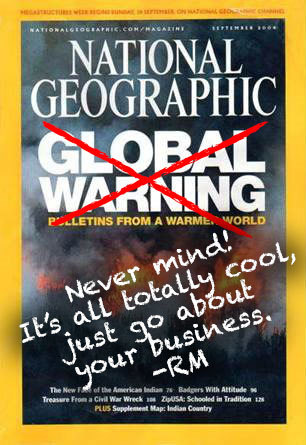 Fox Now Has The Controlling Share Of National Geographic

I know I am not the only one that considers it to be a dark day when National Geographic sells its soul to the devil. Journalistic excellence for 127 years bartered for a 73% controlling share that injects Murdoch’s filthy lucre into the company, and turns it away from the non-profit remit that has driven it all this time. I subscribe to Nat Geo and now I am considering changing that. We shall see – even if the journalistic quality is maintained part of me doesn’t want to flow any power to Rupert Murdoch. Well, his son James actually, but still.

Murdoch murdered Myspace in my opinion – when he took over suddenly half the bandwidth seemed to be crowded with bad adverts and the amount of sex spam went through the roof. The community, which had been one where artists had been able to communicate with each other in a very fruitful way, suddenly got swamped, and one of the most valuable things about that particular acreage of cyberspace slid into the virtual La Brea Tar Pits. Mysace never really regained the ground it lost, and it isn’t anything that anyone is really talking about much anymore. I remember the worst of the rags, The Sun, and it’s broadsheet counterpart, The Times, and some of the people that were given column inches in them, and I shudder to think that they were allowed to call themselves journalists.

$725 Million Buys You A Name Not A Legacy

My school library had dog-eared copies of National Geographic on its shelves that were older than my parents, and the knowledge that was shared in them had endured. National Geographic represented a record of the evolution of certain fields as well – you could see a technology arrive in the world and develop and deliver more fruits to the people using them. The areas of interest, although they were probably affected by some kind of agenda, seemed free-ranging, and less politically or fiscally driven than they may be going forward.

Fox isn’t well known for its unbiased and insightful journalism. It’s known for it’s opinions and it’s talking heads, it’s political connections, and the mistakes it continually makes. Had National Geographic surveyed their public how many of them would have been on-board with the idea? Not too many I am betting. A move that may have been designed to halt some kind of falling off in subscriptions or some need for a fast cash injection may backfire.

If someone like Wozniak or Elon Musk, or even Bezos had stepped in; maybe Google, then I would have felt more comfortable with the tectonic shift in such an established and respected institution. If they want to turn a profit maybe they will see that changing the remit of such a valuable brand name, that stands on its integrity, is a huge mistake. But can you expect a company which has had such problems in the area of accurate reporting to know how to do that? There haven’t been any reports of National Geographic writers or photographers jumping ship, and maybe they all signed NDEs to prevent that, but if National Geographic becomes what Fox detractors have to be fearing it will become, what will take its place?

You could surely market National Geographic with its past reputation, but throw Fox in the mix and it maybe like trying to sell a glass of dirty water.