Muhammad Ali – The Greatest At Self Promotion And More 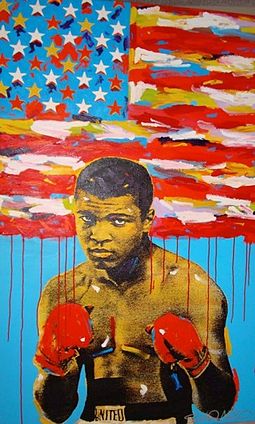 Muhammad Ali Changed What It Meant To Be A Boxer

Float like a butterfly, sting like a bee. Everyone knows that one – and there were many more. Whether you consider it poetry or something else, Muhammad Ali elevated the art of pre-fight smack-talk beyond anything anyone had done before, or has done since. And more importantly he had the chops to back it all up – he wasn’t known as the Greatest by chance. Muhammad Ali was something else – you don’t often get that winning combination of great sportsman and someone who is so erudite, and funny too.
Boxing has some personalities still, but there isn’t anyone that really compares to Muhammad Ali – he was, as he said, the Greatest. Would he be remembered as fondly if he were just a great boxer though? Maybe so, but he was also very involved in civil rights, and he made a stand for what he believed in, and he could talk about his beliefs too. For some he became a very controversial figure, refusing to fight in the Vietnam War, but he always generated interest, and I would say it was generally positive.

I am not sure where I first became aware of him – I think possibly through a chat show with Michael Parkinson, which he used to appear on regularly. There was a cafe where Muhammad Ali hung out with the British boxer Henry Cooper that had pictures of the two men on the walls, and the owner could still tell the tale. There was the Norman Mailer book The Fight. There was the film with Will Smith. And there were the rarer appearances as he grew older, his Parkinson’s Disease more evident.

He who is not courageous enough to take risks will accomplish nothing in life.

But everyone remembered Muhammad Ali in his prime. He is unlikely to be forgotten, both for the sporting achievements, and for what he represented to a lot of people. He wrote several best sellers about his own career, and he recorded some spoken word albums, acted in films, and appeared as himself in a number of shows, and even in a fight with Superman in the comic.

Being interesting is essential as far as promotion goes – you promote the fight (product) and yourself and your beliefs, and you are quick on your feet, like Muhammad Ali was, and people are always going to want to hear what you have to say. Put on a show and have the good to back it up, and you have your one two punch to KO any opponent.